I’m on my early morning run and my right knee whines as I look ahead to a rising hill. I am full of regret. My dinner last night really should have been more than beer, popcorn, and ice cream.

There is only one reasonable response: “fuck”. I say it once, aloud, to no one, because who else is up and moving at this early hour besides asshole birds? I dig deep and tap into a reserve of energy I was saving for this very reason. Got to get out of here. 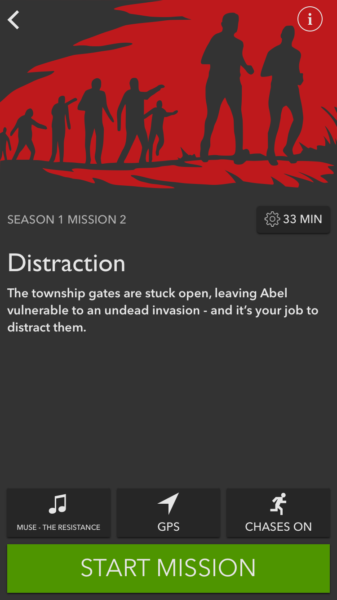 Zombies, Run is a phone app that between tracks of your own music playlist tells a serialized radio play of people living in a post-apocalypse town. You listen to scenes as you run and occasionally pick up in-game items to use toward improving your village via a base-building screen. Also, if you opt into this feature, Zombies, Run uses your GPS location and movement to launch zombie “chases” where you must increase your actual speed for a full minute or be eaten by zombies.

Zombies, Run is a really awesome idea for an app, mixing the distraction of a many-part story with the motivation of being chased by bad things. The story is surprisingly solid with great voice acting, and in later seasons, good foley sound effects. I’ve been on a few runs where I’ve been genuinely moved or laughed out loud. Zombies, Run also deftly navigates an odd narrative hurdle where you, the central character named “Runner 5”, never speaks. There are rarely fewer than two characters in a scene so dialog can carry on while you, the always silent protagonist, only observes. Seemingly the other people living in Abel Township don’t care that you’re kind of a jerk.

Zombies, Run has strong storytelling but its game mechanics like the item collecting and base building, are shallow and largely forgettable. There’s an option to have audio announcements interrupt your music as you pick up items on your run but since items don’t really do anything there’s no point in knowing. Though the announcement, “you’ve picked up a sports bra” guarantees a laugh from me every time. 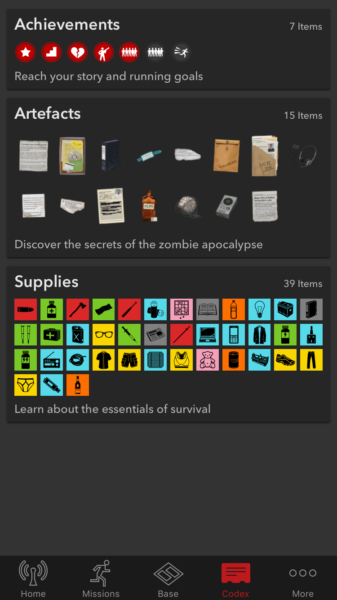 The base builder seems like a neat feature at first but it doesn’t really go anywhere. So what if you upgrade your township’s armory and thus raising its defense rating? There’s no effect or consequence either way. The underlying idea of making players earn the supplies needed to grow your town is a good one as it makes you use the app more, but it’s a pointless pursuit without an incentivizing game mechanic. 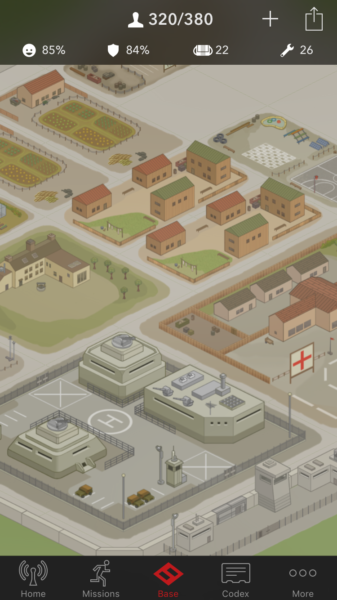 Zombies, Run‘s zombie chases have made me into a better runner, again making sure I keep a small reserve of energy for when the undead come. Zombies always seems to attack at the worst time, right when I’m already nearing my physical limit. I’ve learned to run a more steady pace to ensure my survival. It’s extra disappointing that items in the game have no value since there’s then no penalty for failing to outrun an attack. If you’re caught the only thing that happens is you drop an item to “distract” the zombies. Occasionally mid-run I’ve not been in the mood to push myself and losing an item wasn’t any disincentive for being lazy.

I guess you could say the same for any workout routine but the music you choose to accompany Zombies, Run is hugely important. Right now I’m revisiting Muse’s The Resistance. Melancholic and epic, it’s a surprisingly good fit while you’re being chased by zombies. Unfortunately I’ve too often encountered a bug with Zombies, Run where, for whatever reason, the app won’t recognize my music. The problem being that I don’t find out that there’s a problem with the app until the end of the first story segment and I’m already well into my run. Even though running in silence isn’t the end of the world I do prefer to have a soundtrack while listening to a story about the end of the world. 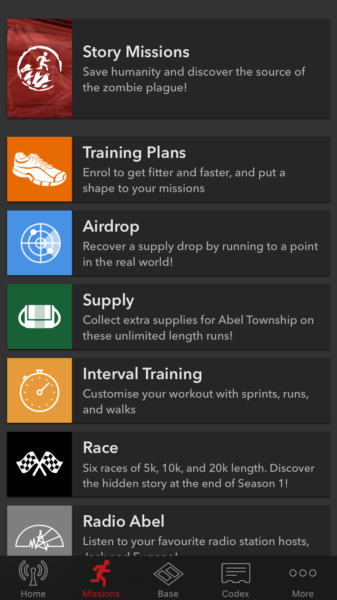 Zombies, Run has a few other small issues here and there, but overall its well-written story and its strong acting makes up for them all. There are all kinds of fitness-tracking stuff, special missions, races, and more that I haven’t mentioned mainly because they seem geared for people who are a bit more dedicated to running. One day soon I’d like to train for a race but for now my daily challenge is heeding my alarm clock each morning. I love running when I’m in the middle of it but that first step out of bed is always brutal. I don’t need Zombies, Run for motivation but the lure of finding out what happens next to Abel Township certainly helps get me moving. If you see me wearing headphones and running at a full sprint, give me a wide berth. The undead won’t be far behind.