I waited impatiently for Pokémon Go to launch, even going as far as signing up for the wait list to get into the game’s early beta testing program. Having heard that the folks behind the geolocation game Ingress were developing this new game, this time with Nintendo’s billions of dollars behind them, I was overly eager to see how they’d do. I hoped that Pokémon Go would be a chance for the developers at Niantic to take lessons learned from Ingress and then turn them into something great. I liked Ingress for a time but grew bored with its repetitive nature and its lack of higher-level play (you can read my post about it here). There just wasn’t enough in the game for me to pursue and the game’s lack of permanence got old, fast. 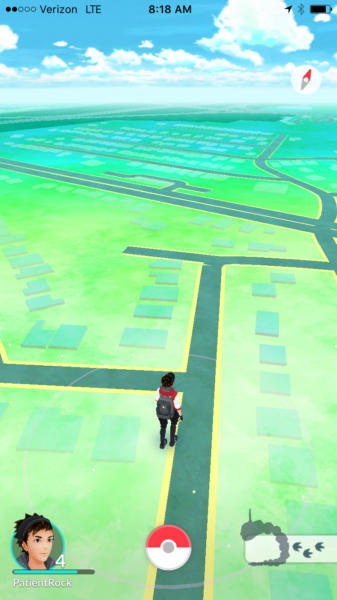 Pokémon Go is a geolocation game for mobile devices that is based on a long-standing series of video games, cartoons, and more. You capture a collection of little monsters, train up their fighting abilities, and occasionally pit them against monsters owned by other players. You wander the real world and based on your phone’s GPS location, the game reveals the location of the monsters available for capture as well as points of interest where you can harvest various items.

OF COURSE Pokémon Go launched the day I got back from vacation. I downloaded the app but resolved to focus on the busy workday ahead. Not that I could have played anyway. The game’s servers couldn’t handle the surge of interest in the game (the game is super buggy). It’s remarkable how many people are playing this silly game. Sure, most of them will likely drift away in the next few weeks, but I’ve been elated to see non-game-playing friends post about their time with Pokémon Go. My friends are discovering what I’ve loved about geolocation gaming, that it gets you outside and exploring new places.

That said, Pokémon Go is terrible at on-boarding new players which is crazy considering my previous statement about how popular it has been with the uninitiated. You’re given very little instruction as how to start catching all those little creatures. It took some digging to discover how to perform some of the most basic actions in the game. Pokémon Go‘s battery saving mode, which I discovered by accident, has to be manually turned on from a tucked-away menu. It’s an interesting and vital function whereby simply holding your phone downwards you can send your screen into an idle mode. The app will still run and actively search for nearby Pokemon to capture, vibrating when you’ve discovered one. This battery-saver is essential while taking long walks between stops and it’s an innovative feature for this kind of game. Why not show it off to new players? 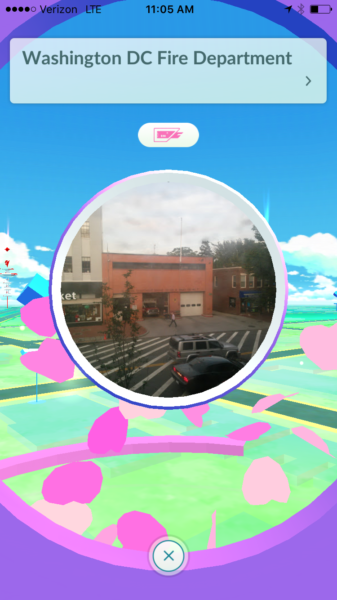 Maybe because I’ve played a few geolocation games that do some of the same things, but after a few days I’m already seeing the cracks in Pokémon Go. There’s just not much to it and what’s there is flawed. Unfortunately Niantic didn’t wander very far from Ingress, so little in fact that much of Pokémon Go’s game map is dictated by Ingress. Every Ingress portal has been converted into a Pokestop, the aforementioned place of interest where you can harvest items.

My walk today was quite familiar as I already knew where all the local Pokestops would be thanks to my time with Ingress. I wondered how Niantic had gotten the license for this game from Nintendo in the first place and it quickly became clear that it was because they already had a database of locations to import.

Unfortunately Pokémon Go isn’t a very good game. Finding specific Pokemon is near impossible. You’re shown little footprint symbols that roughly indicate how far a particular Pokemon is from you, except that you’re not given a direction. I’ve walked in circles trying to nail down where I might grab a certain creature only to have it completely vanish as a choice. A frustrating game mechanic for a franchise whose slogan is “gotta catch ‘em all.”

Player versus player combat can only occur at certain geographic places called gyms where players compete in a sort of King-of-the-Hill game. If your Pokemon wins a fight it stays at that gym until it’s defeated by a challenger. I haven’t participated in many of those fights as each gym I’ve encountered has been guarded by a very high level Pokemon. My only option of course is to try and level up a competing creature, but then those rival players are doing the same. There’s a gym a block from my house and every time I check in, it’s guarded by an even bigger and stronger Pokemon than before. It’s an arms race where the other side has far more free time than I do.

The thing I find most baffling about Pokémon Go is the lack of a social system in the game. There’s no way to check on the progress of friends playing the game and there’s no way to compare stables of Pokemon. 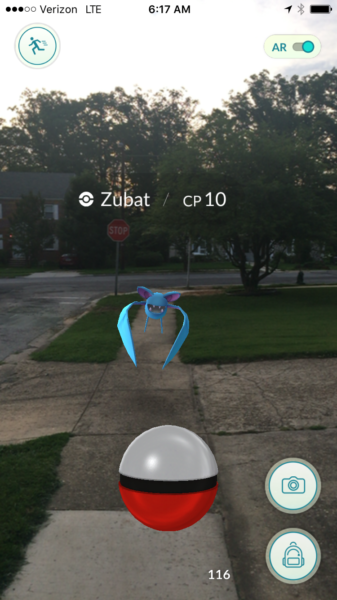 The game does smartly offer an augmented-reality mode while capturing Pokemon that uses your phone’s camera to place the target monster against a real world backdrop. Players have been sharing those photos by the thousands on social media, much to the chagrin of people not interested in the game. Also, reportedly, when you’re fighting for control of a gym you can team up with nearby players to help conquer the monsters within. That would require a certain social coordination that I do not currently have the capacity for. My long term interest in Pokémon Go would be helped by letting me know where I stand in relation to my friends.

I don’t know how long I’ll last with Pokémon Go. There are a ton of the little creatures to collect but as I grab most of the common varieties, I don’t think I’ll have the patience to seek the rare ones. Right now there just isn’t much reason to do so. I work in Washington, D.C. which has a ton of Ingress players so it’s not like I face the problems of players who live in rural areas– I can access a Pokestop without even getting up from my desk at work. I’m at level 9 in the game so perhaps there are some surprises in store at even higher levels (I have no idea of what the level cap even is).

Or perhaps Niantic has plans for introducing new features in the future, like the missions they added to Ingress. I’m a sucker for geolocation games–anything that gives me the excuse to wander around outside–so I’ve got my fingers crossed that Pokémon Go will actually turn into something fun. Right now, even though it’s charming to see a new group of people enjoying geolocation gaming, Pokémon Go is too shallow for me.

One thought on “Gotta catch some of them, I guess”