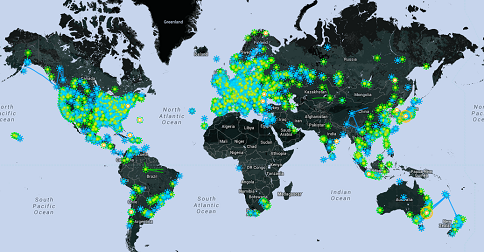 At this very moment there’s a battle raging around you. Whether it’s 3 a.m. or the middle of the workday, people are running around fighting for control of the world, or at least control of a statue in a nearby park where an energy from another dimension is leaking onto our planet.

Ingress is a mobile game developed by a startup within Google, Niantic Labs, that uses your GPS signal to layer augmented reality-enhanced maps on your phone. If you know me at all then you’d immediately recognize that sentence combines ALL OF MY FAVORITE WORDS. The game recently came to iOS after long being exclusive to Android devices and I downloaded it the moment I found out. After starting the app you’re asked to choose a side in this epic battle and for a few days I was paralyzed by the decision. Should I join the Enlightened, the side who want to harness that leaking energy for its powerful properties, or the side of the Resistance who don’t trust the energy’s alien influence? In the end I chose the side with the least popularity in my area, the Enlightened (Plus, who doesn’t want superpowers via a strange alien energy? Weirdos, that’s who). 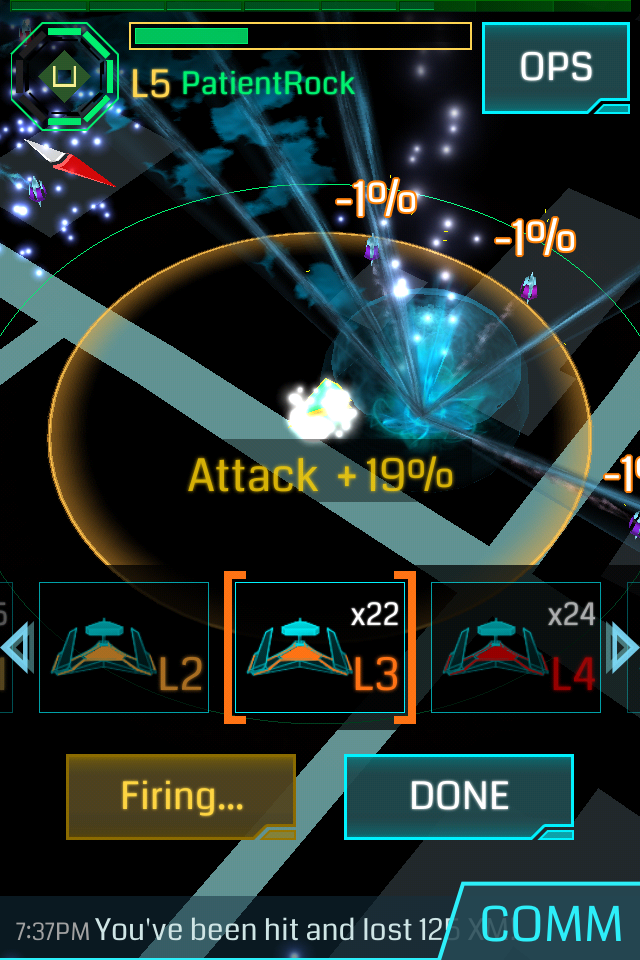 All around you that previously mentioned alien energy is displayed on the map in clouds, concentrated particularly around “portals” which are points of contention between the two warring factions. Portals are user created and by rule centered on real life works of art, signs, or monuments of some kind (don’t worry, since Ingress is a Google product there are plenty of gross corporate tie-ins to retail locations as well).

The two factions fight over control of portals, setting down defenses to maintain ownership of those places, and “hack” friendly and enemy portals alike to earn items and experience points. The main game, however, is about linking portals to create triangular control fields and “capturing” the populace within. There’s a global score between the two factions that’s factored by how much territory their control fields cover, determined by as far as I can tell, Google’s estimate for real life population density within those areas.

Ingress is huge. HUGE. I had no idea how popular this game was until I loaded the browser-based map and saw that much of the real planet Earth is covered in portals. Many games try to create a dramatic narrative about fighting for control of the world but Ingress is truly doing it.

Then why am I so bored?

For a few months I was hooked by Ingress. I read everything about the game, absorbing popular strategies, and uncovering its intricacies. I work in a city so it was easy for me to take breaks from work to attack and hack portals without having to walk far and it was a good excuse to get away from my desk for a few minutes. 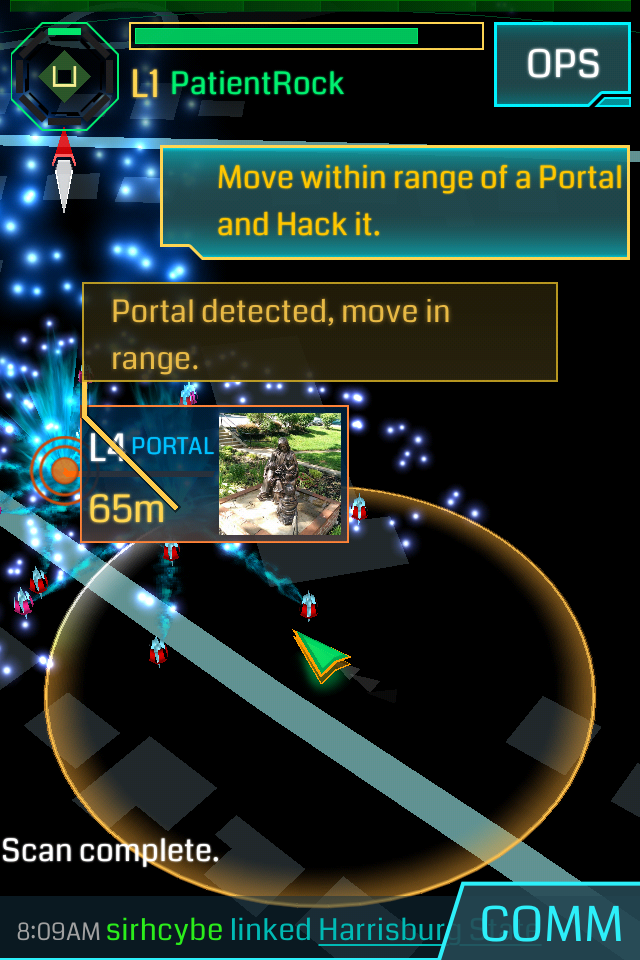 There are three portals within a couple meters of my office building– I can even hack them without leaving my desk– and I announced (to no one in particular) that these portals would now be mine, that I would conquer them and tirelessly defend them against all comers. I attacked the Resistance’s defences holding the portals, the game’s great, ominous soundtrack scoring my mood as I hurled weapon after weapon against them. I eventually prevailed, took over the portals, and then set up my own defences.

Within 20 minutes a high-level Resistance player came through and steamrolled my setup. I tried again, I was crushed. A few more attempts at this over a couple weeks and I gave up. Frustrated but determined I decided that I wouldn’t worry about controlling territory as it became obvious that low-level players didn’t stand chance in Ingress, and instead I would focus on earning experience points to get stronger.

Turns out that it doesn’t even matter. Ownership of territory in Ingress is fluid. It’s rare for even the highest level players to hang onto portals for long, particularly in areas like mine where there are a lot of people playing. It’s a struggle without end, one side “winning” for a time, then the other surges back and takes the leading score.

A lack of permanence is a problem every massive, multiplayer video game faces and like many games in the genre Ingress hasn’t found a good answer. The game can’t allow players to affect its world too much since that would eventually force the game to end in some way, and at least in the Ingress’ current form, the game never ends. The Enlightened and the Resistance will battle forever.

I need more from Ingress. I need to feel what I’m doing in the game has some lasting purpose (other than, perhaps, helping Google Maps improve its geography). If I can’t truly affect the story of this titanic struggle then I need something else to do in the game. 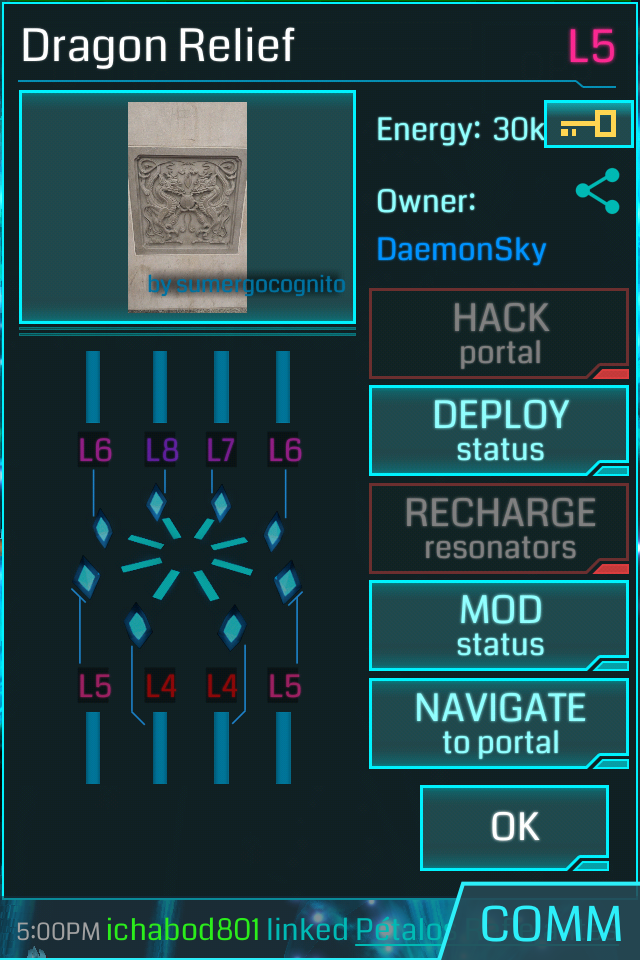 Initially the iOS version of Ingress was missing a key feature, the ability to create portals. That feature was later patched into the game right as my interest had begun to ebb and for a short time I thought my addiction to Ingress had been renewed. While fighting over portals had become boring and futile, perhaps I could instead get excited over creating new ones. That was more on point for why I liked Ingress in the first place, it encouraged me to get away from my work desk for a few minutes and explore my city. Instead of staring down at my phone as I walked around my eyes were up looking for new pieces of art, statues, or interesting places I could turn into new portals. That first day I took a long walk and submitted many new portals after having discovered some great public art nearby that I had never noticed before.

Now, over a month later, those portal submissions have not been approved or denied by whichever sad intern at Google is responsible for reviewing them. So much for that.

It’s too bad. For a time I thought that Ingress would become a steadfast gaming addiction since it gave me a new mission for my lunchtime walks. I even almost bought a t-shirt. The community of people around the game is surprisingly robust and I enjoyed joining the Google Hangout of Enlightened players in my area. Their enthusiastic chatter about the game was infectious. I marveled at their dedication, going on portal raids together at all hours of the night and traveling far for official Ingress events. It’s a lifestyle I can barely comprehend.

Reluctantly I’ve uninstalled Ingress from my phone. Maybe I’ll be back, but the game will first need to officially tip its own balance and figure out some way to let either the immovable object or the irresistible force win.

4 thoughts on “I’m bored with this World War.”