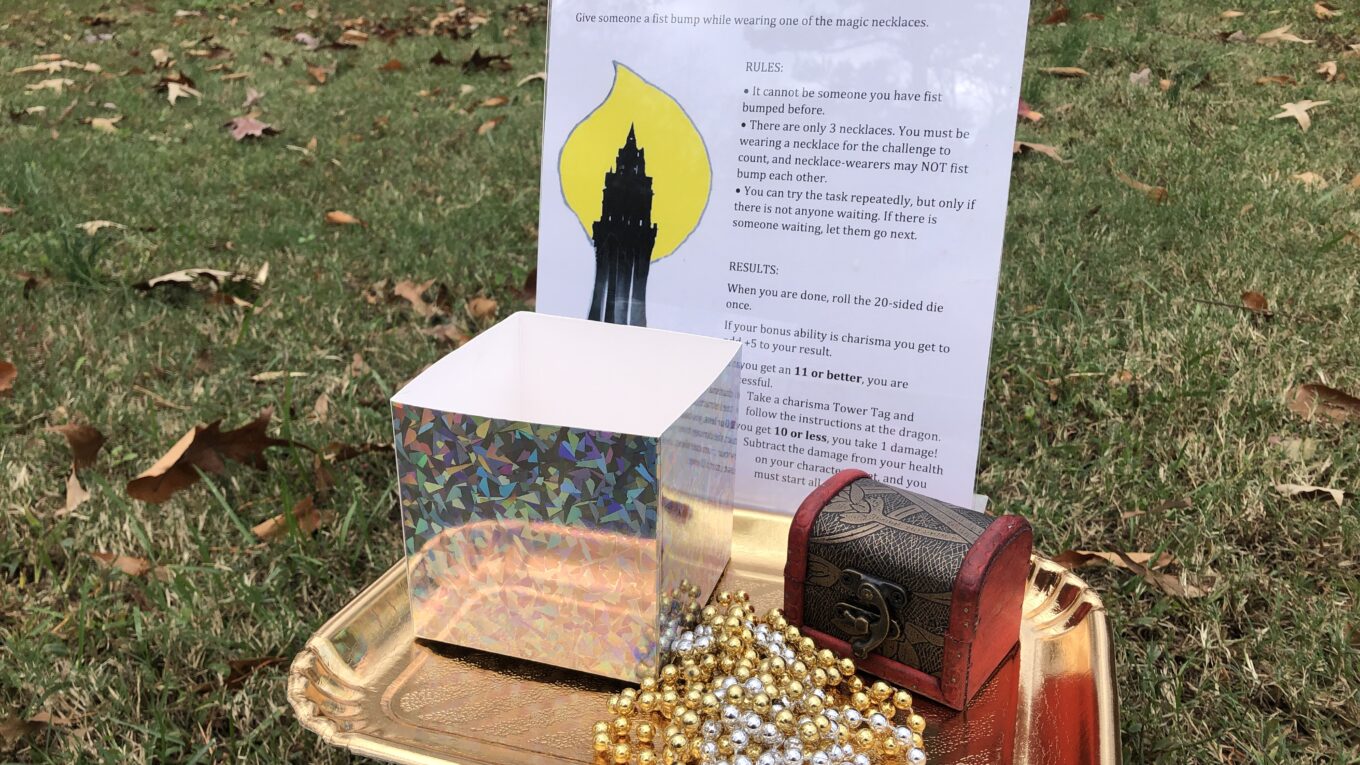 Most years for our kid’s birthday party I try to build some sort of activity for the attendees to enjoy, and to give the wild animals children something to focus on before the cake is lit, the song is sung, and the kids get a sugar injection to ruin everyone’s afternoon. One year we got a bunch of cheap wooden cars for the kids to decorate, and I built a long wooden track the kids could use to race those vehicles. Another year I made a big wooden “plinko” board that the kids could drop ping pong balls into and score points for popular Pokémon at the bottom. These party activities have always been a selfish excuse to build something weird, but thankfully they’ve also been a big hit.

Our kid’s current love is dragons. Books about dragons. Clothing, stickers, toys: dragons. It’s really not a far leap from a past obsession with dinosaurs; the dragons of a world we never knew. Also, thanks to my brainwashing, the kid is really into games and has been itching to learn more about this Dungeons and Dragons thing I play once a week with my pals. Because if you didn’t realize, “dragon” is right there in the name. As I got to thinking about what I wanted to do for this year’s birthday party, a bunch of ideas came crashing together in the gnarled cloverleaf interchange of my brain highway.

The central idea sprung from an experience I had a few years ago when I joined a group of friends to play a “mega game” called Watch the Skies. A mega game, quickly explained, is 60+ nerds meeting up in a place and roleplaying a scenario with various gamified elements for hours and hours. Come to think of it…I can’t believe I never wrote a blog post about my experience with Watch the Skies; the game was a blast and some great photos came out of the day.

Anyway, the idea of doing some sort of mega game came to the fore of my thinking, but, of course, when you’re creating such a thing for a bunch of third graders some major design considerations become necessary tenets. In no particular order:

It came together surprisingly quickly. (I create scavenger and puzzle hunts for a living, and man, I wish they all clicked into place like this one did for me.) The general idea was that a dragon was attacking our town, and the kids would need to work together by performing different activities to defeat it.

I needed some representation of the dragon that wouldn’t kill me to make, and some way to keep track of a score. Hanging in our basement where my dorky stuff is allowed to exist is this old wooden shield upon which my brother painted a dragon when we were kids. Dragon: done.

I’d cut up some plywood, paint it to look like the stone wall of a castle, and hang the shield on that. I thought to get some cheap keyring tags to use as score-keeping tokens. We’d hang those tags from nails driven into the castle wall, color-coding them with stickers (with consistently shaped rhinestones in case color is a problem for anyone), and boom: scoreboard.

Stealing from a concept all the kids would understand, like the “End Dragon” in the video game Minecraft, *this* dragon’s power is supplied by multiple “towers” around the area. Six, in fact. The kids would perform an activity at each tower for a chance to earn tags to hang on the dragon scoreboard placed in a central area. Adding tags to the board would damage the dragon.

The game was a success and stayed within most of the bounds I had set for it! It was a delight to see kids who didn’t know each other challenge each other to games of rock-paper-scissors, or demand a fist bump from some startled adult just trying to make awkward birthday party small talk with another parent. It was funny to discover which kids took the rules seriously, and which kids used it as an opportunity to run around roleplaying. I had made quiet predictions for which camp I thought certain kids would fall into and I was amused and surprised by just how off some of those predictions were. One kid in particular who is usually a bit of a wild man took the whole thing very seriously.

It was a cold and blustery day, but thankfully the weather forecast had given me an accurate heads up. I had secured most everything to keep the wind from blowing it all away, and that had the added benefit of (mostly) keeping the supplies from ending up in the pockets of littler attendees grabbing anything that wasn’t literally nailed down. (Some of the dice were “lost” by the end.)

The game wasn’t quite as self-run as I had intended. Our kid was too excited to referee and mentor kids for whom gaming like this doesn’t arrive as naturally. He just wanted to run around and yell and cheer with everyone, and do the tower activities too. So, that meant me regularly checking in with kids who looked confused. I didn’t mind guiding those kids around, and frankly helping them figure it out was a thousand times more fun than any game I’ve run for adults who, when confused by a game’s rules, tend to blame the game, the game’s designer, and do anything but actually take a moment to… ok, ok.

The kids defeated the dragon a few times and overall it was glorious chaos that spun into general imaginative play. That’s really all you can ask for out of a kid’s birthday party.